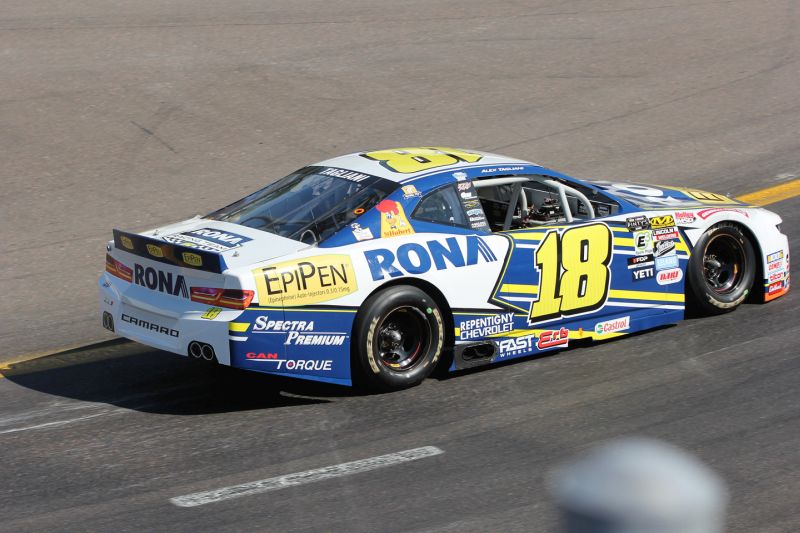 Montreal, August 18, 2019 – Alex Tagliani scored his best oval track result of the 2019 season with a third place finish on Saturday night in round nine of the NASCAR Pinty’s Series held on the one-third mile Riverside International Speedway (RIS) oval track in Antigonish, Nova Scotia. The Quebec driver started the Bumper to Bumper 300 in seventh place and kept in touch with the leaders all race long, but the dramatic end of the scheduled 300-lap race pushed the event into NASCAR overtime where he moved into third place to cross the finish line right behind D.J. Kennington and race winner Jason Hathaway.

For Tagliani, this was his second consecutive podium finish of the season. Jason Hathaway from Appin, Ontario led only one lap, the 305th and last lap after returning a chrome horn bump on Kevin Lacroix that sent him down to sixth place. Lacroix had been the dominant driver leading 195 laps. Tagliani was followed at the finish line by LP Dumoulin, with Alex Labbé rounding out the top five.

“That was quite a performance for the 22 Racing Team tonight with a second consecutive podium finish, only six-hundredths of a second behind second place,” said Tagliani after the race. “We fought hard until the end and I came so close of going by D.J. (Kennington) on the last lap. The team has made tremendous progress on the Chevrolet EpiPen-RONA-St Hubert-Spectra Premium oval car program. I was very happy with its performance in qualifying, as there was only one-tenth of a second gap between my seventh place on the grid and the polesitter. That was very positive

“The result of this race is very promising for the upcoming final three oval races of the season. If the team continues to improve the car bit by bit for each of these races, the results could be very interesting. We hope to finish the season on a strong note. We needed that kind of success after a difficult start of the season on this type of track.

“Next week will be a very busy weekend for me at Mosport road course with a race with the Kyle Busch Motorsports Team in the NASCAR Gander Outdoors Truck Series and of course a very important race in the NASCAR Pinty’s Series with my number 18 car. I look forward to do very well in both races,” concluded Tagliani.

Only 14 drivers started the RIS race with 12 crossing the finish line at the end of the Bumper to Bumper 300.  Nine cars finished on the lead lap. The 305-lap race was under full course caution nine times for a total of 53 laps. The Riverside International Speedway race will be televised on TSN on Saturday, August 24 at 1:30 p.m.

No major changes in the driver top five standings, but the noose is tightening up on leader Andrew Ranger who finished seventh at Riverside. Ranger is still leading, but gap has been reduced to 11 points over Kevin Lacroix (374) and to 17 on LP Dumoulin (368). By finishing ahead of all the rivals ahead of him in the standings, Tagliani shaved four points from Ranger’s lead. He is still fourth with 352 points, 33 points back. D.J. Kennington rounds out the top five with 328 points.

The NASCAR Pinty’s Series returns to Canadian Tire Motorsport Park famed road course in Bowmanville, Ontario for round 10 of the season the weekend of August 24. Tagliani will be a busy driver on Sunday, August 25 competing in the 51-lap NASCAR Pinty’s race scheduled to start at 11:05 a.m. and then at 2:30 p.m., driving for 64 laps in the Chevrolet Silverado 250 NASCAR Gander Outdoors Truck Series race at the wheel of the number 51 Kyle Busch Motorsports entry. For the truck race, CanTorque, RONA and Spectra Premium will sponsor Tagliani’s Tundra.