Tagliani And Camirand On Podium at GP3R 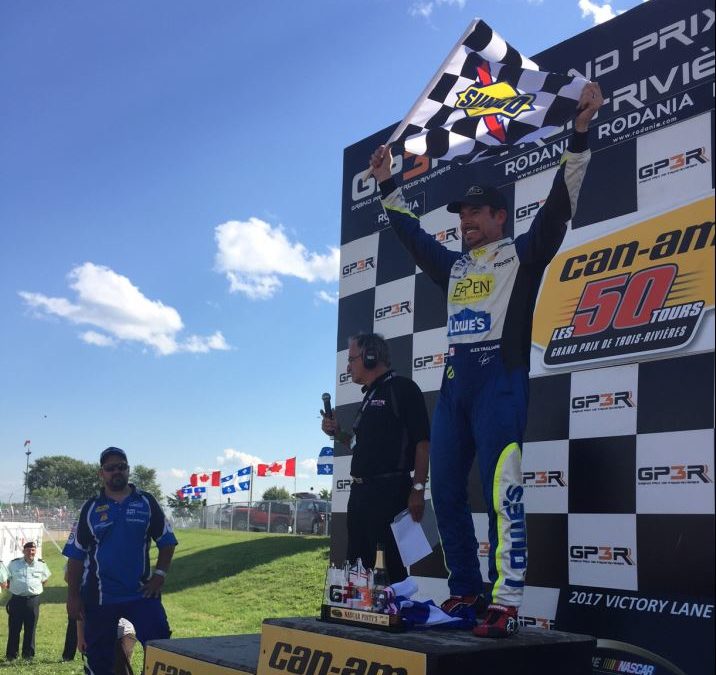 Trois Rivieres, QC, Aug. 14, 2017:  The NASCAR Pinty’s Series returned to road racing action on the weekend for the ninth event of the 2017 season.  Both of the 22 Racing entries finished on the podium making for a great day for both teams.

During Saturdays practice session for the Can Am 50 on Sunday, Tagliani in the #18 EpiPen/Lowes/St-Huberts Dodge was shown as the quickest. Marc Antoine Camirand in the #22 GM Paille Chevrolet would follow that up with the 4th quickest time.

Later in the afternoon the teams would line up for qualifying with three separate groups going on track to post times.  Tagliani & Camirand were both in the quickest  – or final group.  When the session ended Tagliani had posted a time fast enough to line him up on the outside of the front row with Camirand lining up in row two in third position.

At the start of the race Ranger took over the lead from the pole with Camirand & Tagliani falling in behind in 2nd and 3rd.  Tagliani would eventually move past his team mate to take over 2nd.  With the first half of the race being run with very few cautions, it was a very quick pace.  Just past the half way mark Tagliani made his move on Ranger out braking him into the corner and taking over the lead.  A lead he would not give up for the remaining 22 laps. Camirand meanwhile ran in third after being passed by Tagliani and was never seriously challenged for the position.  While being able to stay with the two leaders he was unable to make a move to pass.

This was Tagliani’s first win on this Grand Prix circuit in NASCAR and Marc-Antoine Camirand added another podium finish at GP3R bringing his total to twenty-two covering all racing disciplines.

“First of all this is a race I have wanted to win for a long time,” said Tagliani after the podium celebration.  “I have won here in other forms of racing but now I have won in NASCAR too. I am very proud to work with Scott (Steckly) and all of the 22 Racing team.  We dominated at ICAR and were strong at Toronto but we weren’t able to capitalize.  This race was really representative of how good this team really is. Yesterday we fought some problems with drive shafts and brakes but my guys were the last to leave last night and the first ones back this morning.  It’s a total team effort.  And finally it was nice to show our new sponsor in 2017 Lowes that we are a force to be reckoned with and get them their first win.”

“Really happy with the GM Paille #22 car today,” said Marc-Antoine Camirand after the race.  “Very proud of what our team did today and happy with a 3rd place podium finish – my twenty second podium at GP3R.  It’s a new record here and I am very proud of that. We stayed close to Tagliani and Ranger but they were very fast.  Next for us in Canadian Tire Motorsport Park in September and I’m sure we will have another good car and maybe be able to challenge them for the win there.”

The Can-Am 50 will air on TSN on Saturday Aug. 19 at NOON and it was broadcast live on RDS.

Next on the agenda will be Riverside Speedway for the Bumper to Bumper 300 on Saturday Aug. 19th.  For more information please visit their website riversidespeedway.caor visit the NASCAR Pinty’s Series information site at hometracks.nascar.com   Tagliani will again be behind the wheel of the #18 EpiPen/Lowes Dodge and Donald Theetge will be piloting the #22 Circuit Acura/Le Soliet/L’Antidote Media Dodge.

Follow the 22 Racing Team on social media for behind the scenes updates on; Twitter@22RacingTeam & @ScottSteckly22, Facebook Fan Page 22racingteam and Instagram22racingteam