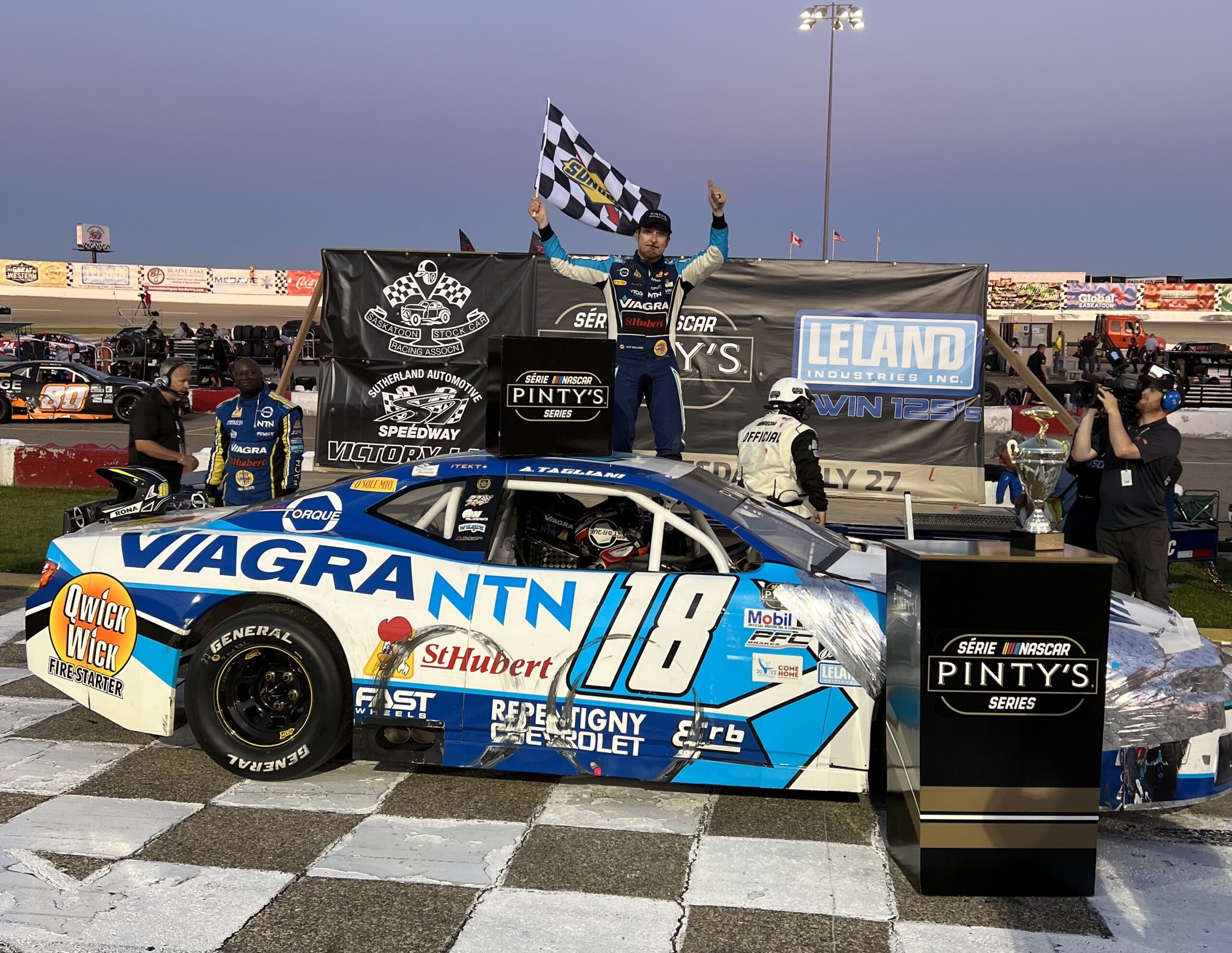 Saskatoon, SK – Friday, July 29, 2022 – In the final stretch of the NASCAR Pinty’s Series Western swing the 22 Racing Team traveled to Sutherland Automotive Speedway in Saskatoon, Saskatchewan for the Leland Industries Twin 125’s. Alex Tagliani and Treyten Lapcevich, were joined by rookie Kyle Steckly making his NASCAR Pinty’s Series debut. It was a challenging day for the 22 Racing Team and drivers, but Alex Tagliani came out on top, finishing 1st in the second race of the double header.

Treyten Lapcevich held onto the pole position, and led the first 52 laps of the race, before getting passed by Andrew Ranger. Shortly after, Lapcevich made heavy contact with T.J. Rinomato causing a red flag. Lapcevich felt that the speed was there to drive back to the front, but the damage was too extensive and he finished 5th. Kyle Steckly and his No. 22 APC Auto Parts Centres / CANUSA / WingN’It Restaurants Chevrolet Camaro fell back to 10th and began working their way back to the front while avoiding some wrecks. With some late race cautions and restarts, he was battling for 3rd at the end but came one spot short in 4th. Alex Tagliani struggled “to make moves because the second groove was not open yet, it was too warm,” and he finished 7th.

In the hour-long break between races the 22 Racing Team got hard at work repairing the three cars. “Scott [Steckly, owner] did an amazing job on the change in the break, and the car was really a rocketship in race two,” Tagliani said about his No. 18 Viagra / St Hubert Chevrolet Camaro. Starting 10th Tagliani worked his way up and took the lead on lap 42. He held onto 1st place through some difficult lap traffic and restarts, and secured the win! It was Tagliani’s first win at Sutherland Automotive Speedway and his first win of the 2022 season. “A 22 Racing car in victory lane is a great way of finishing the Western tour,” Tagliani said.

Kyle Steckly started the second race in 8th and fell back. He slowly worked his way to the front, but had difficulties on the restarts. Steckly was trying to pass for 5th when he got into the wall and knocked the toe out of the car, causing him to hold on for a 12th-place finish. “Overall a solid first night out, and can’t thank APC Auto Parts and WingN’It Restaurants enough for the opportunity, and hope we can do it again,” Steckly said. Treyten Lapcevich started 2nd. Lapcevich showed a lot of speed, but suffered battery issues that caused him to fall laps down and finish 17th. “We had a super fast car in both the races, just a lot of bad luck,” Lapcevich said.