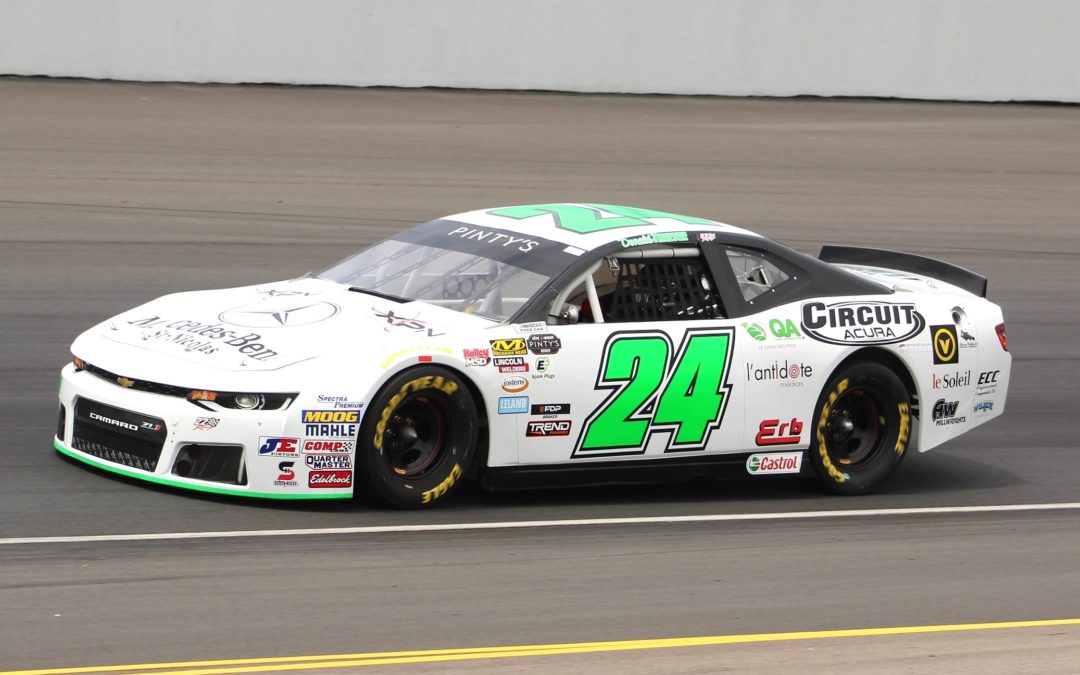 Boischatel, QC, Monday August 20, 2018:  The ninth round of the 2018 NASCAR Pintys Series took place on Sunday at Riverside International Speedway.  After a rain delay on Saturday the race was rescheduled until Sunday at 1:30 p.m.  Theetge had high hopes for a podium finish but an early race issue in the pits resulted in a seventh-place finish

With all events being cancelled on Saturday, a half hour practice was provided for the teams Sunday morning.  Theetge in his #24 Mercedes-Benz/Circuit Acura Chevrolet Camaro was shown third quickest at the end of the session.  But due to the rain qualifying was cancelled so the teams were lined up for the start of the Bumper to Bumper 300 in order of owner points in the NASCAR standings.  Theetge was scored tied for 7th in the standings so he lined up his entry in row four on the outside.

Theetges car was quick from the start and he was able to make up a few positions before the first of two competition cautions.  At lap 75 his team called him to pit road for fuel but a miscue by the team fueling the car cost Theetge a penalty and he had to re-start at the rear of the field in 15th.  Theetge fought to gain positions all day but with a long green flag run he lost a lap to the leaders and with virtually no cautions for the remainder of the race was unable to get his lap back.  A seventh-place result was due to his hard work and determination.

“I am very disappointed in our finish today,” said Theetge after the race. “This was a really important one for us to try to get back into the points chase but it didn’t happen.  We had such a strong car, but we were unable to show how good it was because of re-starting at the rear of the pack and losing a lap.”

Theetge is scored tied for seventh in the NASCAR Pinty’s Series standings and will continue to challenge for wins at the remaining four events this season.

The next event on the tour will be at Canadian Tire Motorsport Park on August 25/26th where the NASCAR Pinty’s Series joins the Camping World Truck Series who are making their only appearance in Canada.