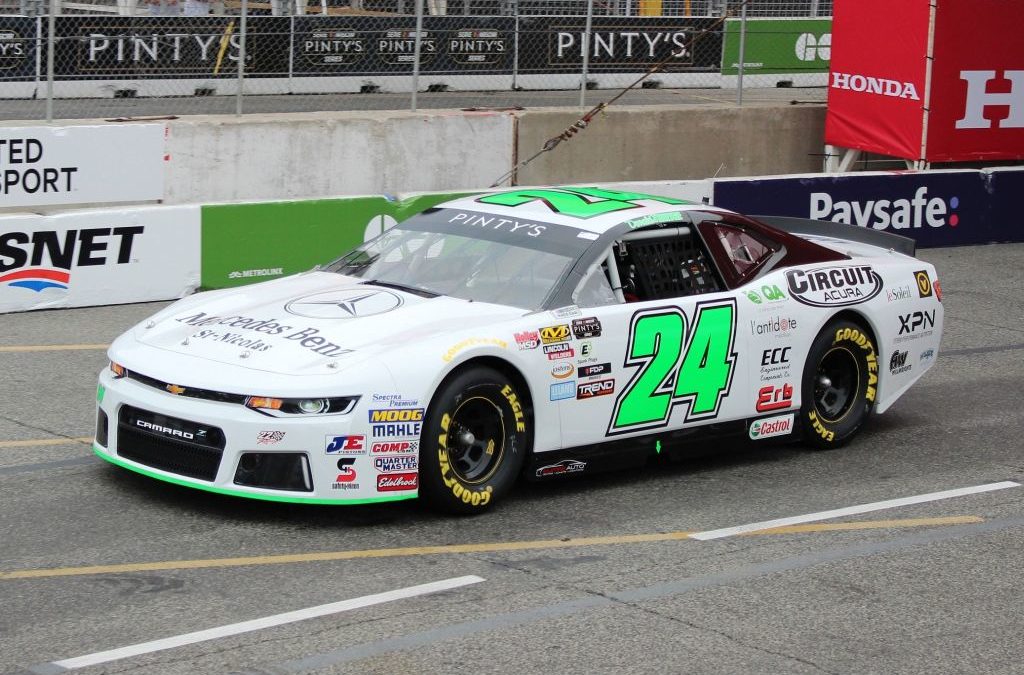 TORONTO, ON, Sunday July 15, 2018:  Donald Theetge had a goal in mind when he came to Toronto for the Pinty’s Grand Prix, event number 4 in the NASCAR Pinty’s Series championship.  This would be Theetges first appearance on the streets of Toronto since 2003 in the CASCAR Super Series and a lot had changed in the ensuing 15 years.

Theetge, driver of the #24 Mercedes-Benz St. Nicolas/Circuit Acura Camaro took to the track for Friday mornings practice session with optimism and the goal was to run as many laps as possible to get comfortable in the car on the 1.755-mile, 11 turn street course.  They were able to score consistent laps within the top 15 and the team would then go on to qualify in 14th for the 35-lap race on Saturday.

At the drop of the green and with starting on the outside lane, Theetge initially dropped back to 17th but was quickly able to move back into the top twelve.  During the final 20 laps Theetge would battle between 10th and 12th with several other drivers but when the checkered flag waved he had passed additional competitors to post an impressive 9th place finish.

“I had a goal when coming to Toronto and that was to finish in the top eight and gain valuable championship points prior to heading out west,” said Theetge.  “While we finished slightly outside of that in 9th I am still really pleased with our day.  The car was good, and we raced with a lot of drivers out there all day and the car still looks great.  A good accomplishment today for our team.”

Donald Theetge and his Mercedes-Benz/Circuit Acura team are scored in 8th in the NASCAR championship standings, 32 points out of the lead position.

The NASCAR Pinty’s Series teams will now head to western Canada for the next two events.  Wyant Group Raceway will host the series only mid-week event on Wednesday July 25th with twin 125 lap dual championship races.