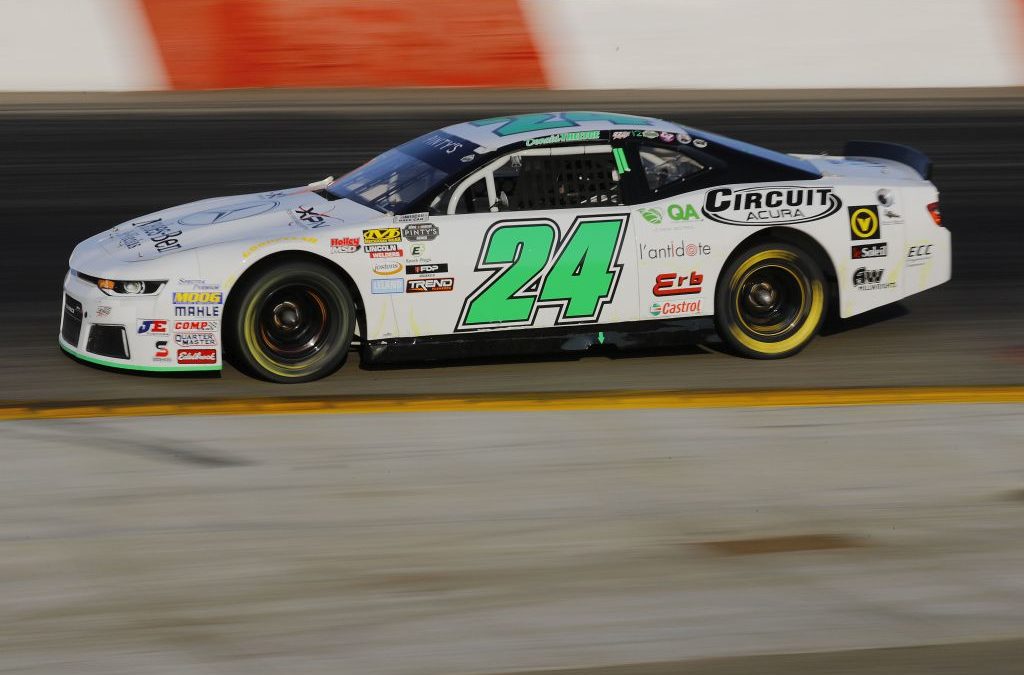 Wetaskiwin, AB, Sunday July 29, 2018:   The final leg of the 2018 NASCAR Pinty’s Series Western Canada swing took place on Saturday night at Edmonton International Raceway.  Theetge had a strong car for most of the race but a late race brush with the wall ended his day early.

Afte practicing 4th quickest, the 24 Mercedes-Benz St. Nicolas/Circuit Acura Camaro team debriefed and decided they needed to make some changes to the car prior to qualifying.  “The car was good, but I felt we could make it better,” said Theetge.  “Greg (Gibson crew chief) and I talked and decided on a small change.”

Next up was qualifying and the #24 car moved up a couple more positions posting the 2nd quickest time.  For the second time in four days, Theetge would see himself lining up on the outside of row one for the start of the race.

At the drop of the green flag for the Luxxur 300, Theetge dropped down a lane behind the leader and as planned ran consistent times for the first 150 laps until the competition caution.  Theetge asked his crew for a couple of adjustments on the car and they set to work making those and adding fuel and four tires.  Theetge lined up in 3d for the restart.  With 150 laps remaining in the 300-lap event it was time to try to make some moves to the front of the pack, but Theetge started to struggle with the handling of his #24 car.  Unfortunately for the team a suspension problem caused them to exit the race on lap 214.  A disappointing 15th place finish was the result.

“I had a good car tonight and I think we were within one adjustment from being able to challenge for the top spot,” said Theetge.  “I touched the wall and a few laps later a suspension part broke.  I am very disappointed as we felt we had a top five car and that we could have continued to make gains on the championship.  But on a positive my crew worked hard and kept making gains all day.”

The teams will next race in the Grand Prix de Trois Rivieres on August 10-12th.  Theetge and his team are looking forward to this event that is close to their home.