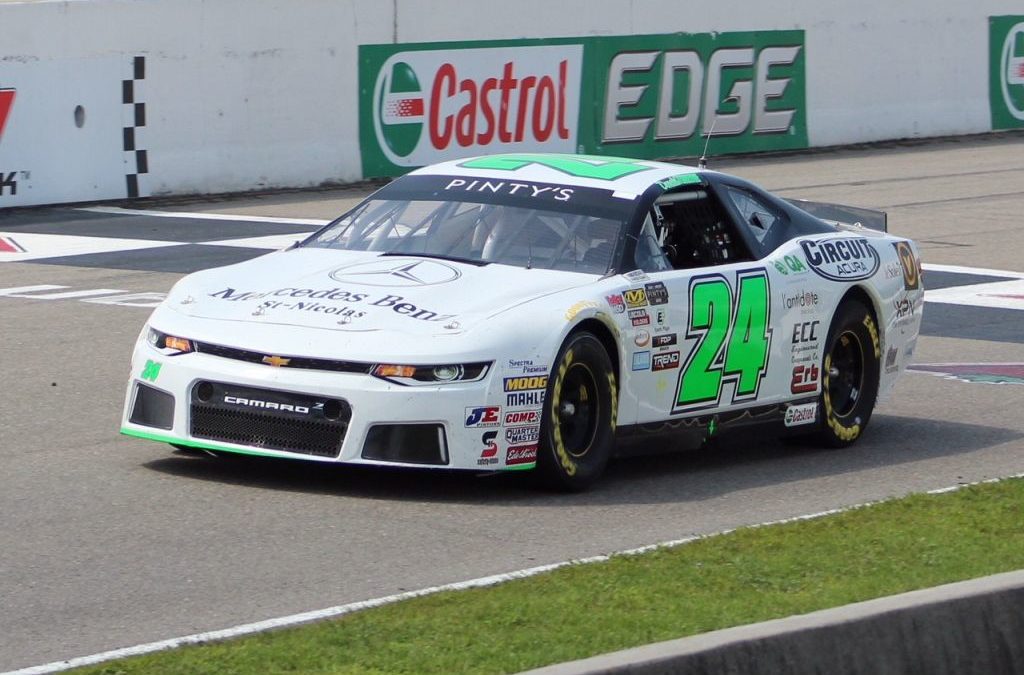 Clarington, ON, Sunday August 26, 2018:   Donald Theetge went to Canadian Tire Motorsport Park this weekend hoping to again post a top ten finish and he got his wish in round 10 of the 2018 NASCAR Pinty’s Series season.

Theetge driver of the #24 Mercedes-Benz St Nicolas/Circuit Acura Chevrolet Camaro started off the weekend on Saturday with practice where he was shown in 12th at the finish of the one-hour session.

Later in the afternoon, the qualifying session was washed out by rain showers in the area and according to the NASCAR rule book the Total Care 200 on Sunday would have drivers line up based on their practice results earlier in the day.

At the drop of the green on Sunday, Theetge found himself shuffled back a few positions as everyone jockeyed for position and to get into single file.  The strategy was to come to pit road anytime after lap 10 for fuel and when the caution waved at lap 16 it gave them the opportunity to make two stops, one for four tires and one for fuel.  Theetge would then restart in the 21st position.  Through his determination and perseverance, he continued to pick off his competitors one by one and crossed the finish line in 10th position.

“The first set of tires was not very good,” said Theetge after the race.  “Once we changed tires and got fuel the car took off.  Greg and my crew gave me a good car for the second half of the race and we even improved our lap times from our previous visit here at CTMP in May.  To finish in the top ten this weekend against these great road racers I think we did a good job today.”

After a one week break, race number 11 of 13 will take place on September 8th at Autodrome St. Eustache.