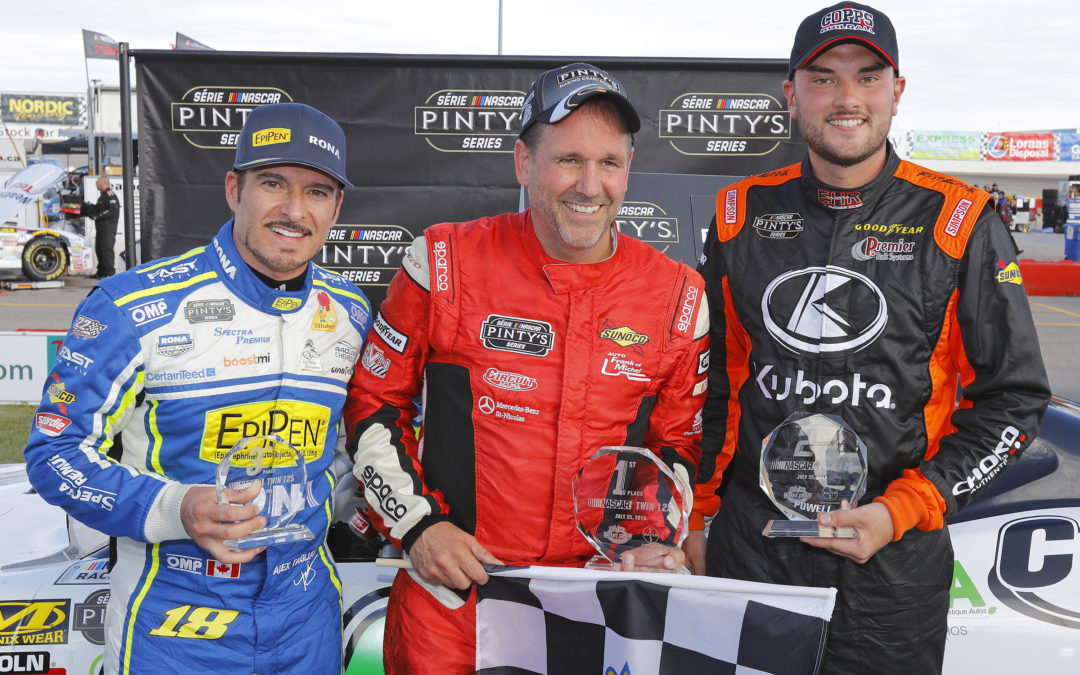 SASKATOON, SK, Thursday July 26, 2018:   Donald Theetge driver of the #24 Mercedes-Benz St Nicolas/Circuit Acura Chevrolet Camaro ZL1 came to Western Canada with one thing on his mind.  Tonight, he realized that dream with his first NASCAR Pintys Series win in the first of Twin 125 full points races at Wyant Group Raceway in Saskatoon, SK.

Leading up to the win, Theetge was extremely happy with his car right off the trailer and in practice was posted as 3rd quickest.  “I am really happy with my car,” said Theetge after practice.  “The 22 team has given me a car I can win with.”

Theetge would then follow up his 3rd in practice with the 2nd fastest time in qualifying lining him up for the start on the outside of row one.

Theetge settle into the top three during the early stages of race one in the Velocity Prairie Thunder Bayer Twin 125’s until lap 16 when he took the lead and never looked back.  A late race caution had everyone on the edge of their seats but Theetge easily sped away from the field again to go on to take the checkered flag in what would be his first NASCAR win.

“First of all, a dream come true with the win,” said Theetge.  “The car was really quick, and we finally won one after being so close last year. I would like to say thank you to Scott as we chose him and his 22 Racing team because we knew that we could win a race with his team.  We are very proud to have done this and we say thank you to him and Greg Gibson my crew chief and the whole 24 team.”

Starting the second of the Velocity Prairie Bayer Twin 125’s in second position, Theetge looked to go to the front of the field again.  Over the course of the 125 laps the car started to get loose on entry and Theetge found himself running the top line on the track.  After a race long battle with eventual winner Cole Powell where they ran side by side for many laps, he went on to finish 4th.

“The second race at the beginning I thought we were catching Dumoulin for maybe another win, but the car started to get loose on entrance, so I had to run the higher grove.  That’s what we had to do, and we finished fourth so another good race. We made some points tonight and if we can be in top 5 in Edmonton before Trois Rivieres I think we will be in good shape as still five more oval races.”