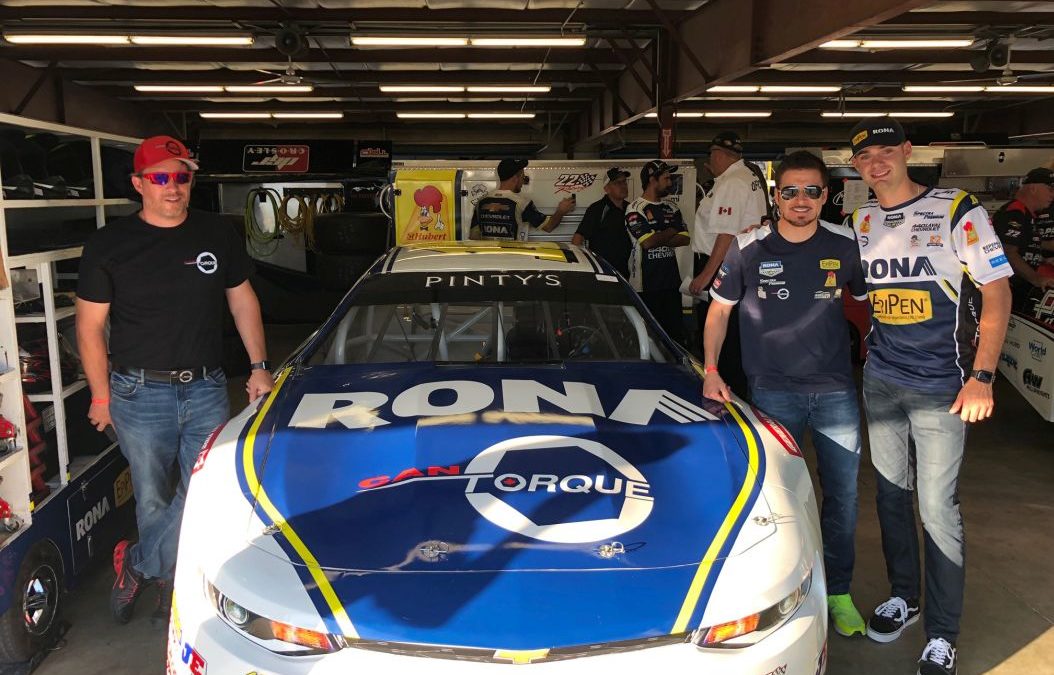 All 24 cars entered in this race lined-up according to their practice times as qualifying was rained out. The 23-year old Guénette from Terrebonne, Quebec, subbing for Alex Tagliani for a second consecutive race, started 12th on the grid. In the 200-lap “Pinty’s Fall Brawl”, Guénette quickly moved up the ranks to hold sixth place by lap 103. On the restart after the mandatory red flag mid-race pit stop, Guénette moved as high as third place before slipping to seventh at the finish line.

“Another great weekend of racing at Jukasa,” commented Alex Guénette. “Unfortunately, qualifying was rained out which denied me track time and the ability to learn more about it, plus I was unable to improve on my 12th place result in free practice. The first half went very well as I was up to sixth place by mid-race.

“During the mandatory pit stop, the team made excellent adjustments and brought the car to a higher level which enabled me to move up to third place with 30 laps to go. On the last restart, I was not aggressive enough in protecting my position. We had the speed, but I was too preoccupied with not being in the way of drivers around me, who on the other hand, were very aggressive. A lesson learned. I’m still quite pleased with the result and I want to thank Alex Tagliani and the members of 22 Racing for giving me the chance to showcase my talent.”

Sidelined once again from competition for the third race in a row, Alex Tagliani commented on Alex Guénette’s performance at Jukasa.

“We achieved our goal, which was to preserve our fourth place in the Owner Standings with our substitute drivers after I was forced to sit on the sideline for the last three races,” Alex Tagliani said. “So, I am very satisfied with the final result for the Team 22 Racing #18 Chevrolet. We faced a lot of challenges this season with oval car set ups, but what surprises me is that we were still contenders on some ovals.

“In the race at Jukasa, Alex (Guénette) did an excellent job. I think he had the possibility of finishing the race in fourth place, but he was kind of pushed around in the first couple of laps after the last restart. It was still a very good performance for the driver of the RONA/EpiPen/St Hubert/Spectra Premium car. The season is now over, and I’m already thinking of the next one. There is a lot of work to be done before the start of the 2020 season. Last year, I was in a heated battle for the championship until the season finale and this year we finished fourth. I am still quite satisfied, but we are going to push harder next year.”

Brett Taylor of Calgary, Alberta won the Pinty’s Fall Brawl ahead of Jason Hathaway from Appin, Ontario and Québec City driver Donald Theetge, but it was Andrew Ranger of Roxton Pond, Québec who won the war by finishing fourth ahead of contender Kevin Lacroix to claim his third NASCAR Pinty’s Series title. Twenty-four drivers started the NASCAR Pinty’s race with 21 crossing the finish line.  Fifteen cars were on the lead lap. The 200-lap race was under full course caution four times for a total of 28 laps.

In the car owner standings: