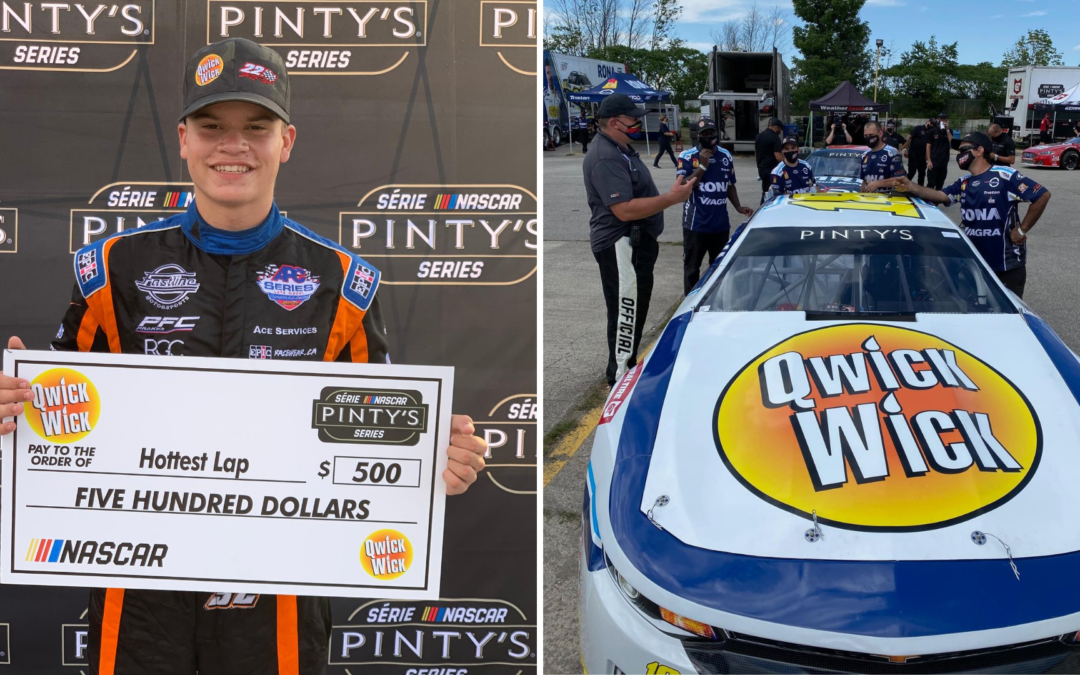 Although cautiously optimistic about his NASCAR Pinty’s Series debut Lapcevich was familiar with attaining success at Sunset Speedway where he’s previously earned numerous feature-wins between 2015 and 2016 and became the youngest-ever Sunset Speedway Champion and Rookie of the Year in 2015.

With limited seat time, and no official practice or qualifying in the 22 Racing prepared #18 Chevrolet Camaro the resident of Grimsby, Ontario knew his extensive knowledge of the third-mile oval in Innisfil, Ontario would be crucial.  During the “Shake-Down Session” Lapcevich earned the second fastest time of the thirteen-car field for the twin 125 lap event.

In the first of the two races the driver of the #18 Qwick Wick/RONA/Viagra/St. Hubert Chevrolet would start from the fourth row in the Qwick Wick 125. The youngest of the Lapcevich racing dynasty was fired up and quickly charged up to third place.  Jostling with the highly competitive front group he momentarily fell back before a series of caution periods would set up the field for a highly dramatic overtime finish that would see the rookie earn his first ever NASCAR Pinty’s Series podium crossing the start/finish line in second just .286 seconds behind the winner.

“Saving the equipment is imperative for a doubleheader raceday and Treyten displayed the necessary maturity and race-craft to set himself up for a solid second race.” said 22 Racing Team owner Scott Steckly

“It was very hot yesterday! We were really good for the first sixty laps then car began to fall off but we held on for two good finishes. I learned a lot and I need to focus on better tire management in the future.“ said Lapcevich

The 16-year-old Rookie would start from the second row for the final race of the day, the Canadian Tire 125. Feeling more comfortable in the #18 Qwick Wick / RONA / VIAGRA Camaro Lapcevich would take the lead for fourteen laps.

Jostling for position with numerous series veterans Lapcevich would remain in the top five for the entire contest, eventually crossing the start/finish line with a solid fourth place finish and earning a ‘Qwick Wick Hottest Lap of the Race’ award for race number 2 to cap off his series debut. Lapcevich sits only two points behind series leader Jason Hathaway in the 2020 NASCAR Pinty’s Series standings.

“It was a really good experience and I’m very happy with the runs we put together. I’m really thankful for the opportunity and to Alex, Scott and the entire 22 Racing team, Qwick Wick, Rona, VIAGRA and all the sponsors that made this weekend possible.” added Lapcevich

The NASCAR Pinty’s Series will head to Flamboro Speedway in Hamilton, Ontario, on Saturday, August 29 for the next set of 125-lap twin races.