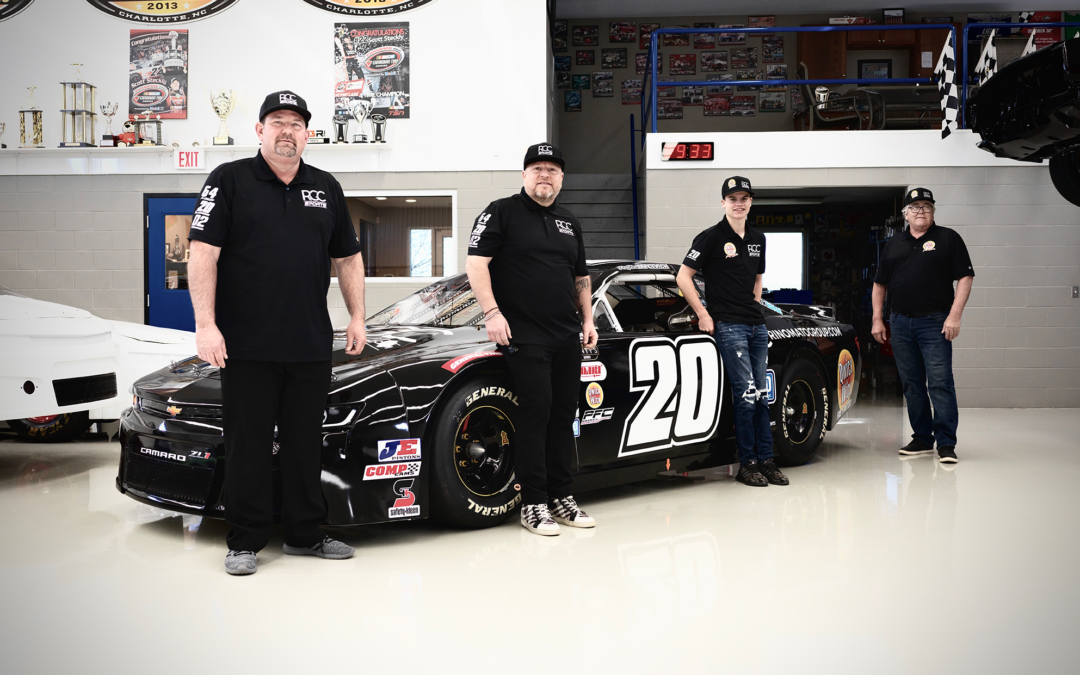 March. 19, 2021, Milverton, ON, CANADA – Teen Rookie Treyten Lapcevich is proud to announce that he will run the full 2021 NASCAR Pinty’s Series Season with 22 Racing.

Subbing for Alex Tagliani, 16-year-old Lapcevich made an impressive NASCAR Pinty’s Series debut last August at Sunset Speedway in the first of three twin-125 race weekends that comprised the Pinty’s FanCave Challenge. Showing that he was not going to be intimidated by series’ veterans, his maturity and patience resulted in a dramatic overtime finish in the Qwick Wick 125 that would see him earn his first ever NASCAR Pinty’s Series podium crossing the start/finish line in second place just .286 seconds behind the winner.

One of the youngest of the Lapcevich racing dynasty, Treyten went on to finish fourth in the second race of the weekend after leading fourteen laps. His efforts not only resulted in two top-five finishes he also earned the ‘Qwick Wick Hottest Lap of the Race’ award for race number two to cap off his series debut.

The Grimsby, Ontario driver is no stranger to success earning numerous feature-wins between 2015 and 2016 and became the youngest-ever Sunset Speedway Champion and Rookie of the Year in 2015. More recently he finished third in the 2019 APC championship standings claiming three podi-ums, two of which came at tracks featured on the 2021 NASCAR Pinty’s schedule – Jukasa and Sun-set.

In addition to being an avid snowboarder, Lapcevich participates in various iRacing events and series to stay sharp and have fun. In his American IRacing League rookie-season Lapcevich was able secure the Team 126 Late Model division Championship.

Much like last year’s debut where Lapcevich was backed by Canadian Motorsport Hall of Famers Scott Steckly and Alex Tagliani, this season’s program is in part an effort backed by NASCAR Pinty’s Series drivers Mark Dilley and T.J. Rinomato to create an opportunity for a very skilled young driver to step-up to Canada’s premier motorsports division.

Treyten Lapcevich commented “I’m very thankful for the opportunity given to me by RGC SPORTS and Qwick Wick, to be able to step into the 22 Racing stable for a full-time effort. So excited to be working with 22 Racing again, after my one-off run last year with them, such a great group. The amount of knowledge around me is insane, obviously having my Dad, brother, Mark Dilley and Scott Steckly who’ve had just so much success in the Pinty’s series. I’m grateful for everyone who had a hand in putting this together, and I’m definitely going to make the most of this opportunity!”

RGC SPORTS/RINOMATOGROUP.COM who has backed Lapcevich’s Pro Late Model and iRacing programs for a number of years is the driving force behind his foray into the highly competitive NASCAR Pinty’s Series.

“RGC is very excited to add Treyten Lapcevich to the RGC SPORTS driver roster for 2021. As one of Canada’s most exciting and talented young drivers, Treyten brings an exciting new element to our three-car team. With Treyten in the 20 car, Mark Dilley in the 64 car, and myself in the 02, the 2021 season is going to be a breakout year for the RGC SPORTS race team and its corporate partners. We can’t wait to get to the race track this May”, said TJ Rinomato, CEO of RGC

Frank Wall, CEO of Qwick Wick stated “When RGC Sports came to us with a joint sponsorship pro-gram for Treyten we couldn’t have asked for better opportunity & sponsorship partners. When you can bring together an owner that has four NASCAR Pinty’s Series Championships, and two current drivers in the series to support Treyten on and off the track, and a team of many other great people it’s kind like seeing the Pinty’s Series dream team come together.

All races will air delayed on TSN and RDS in Canada and MAVTV in the United States.