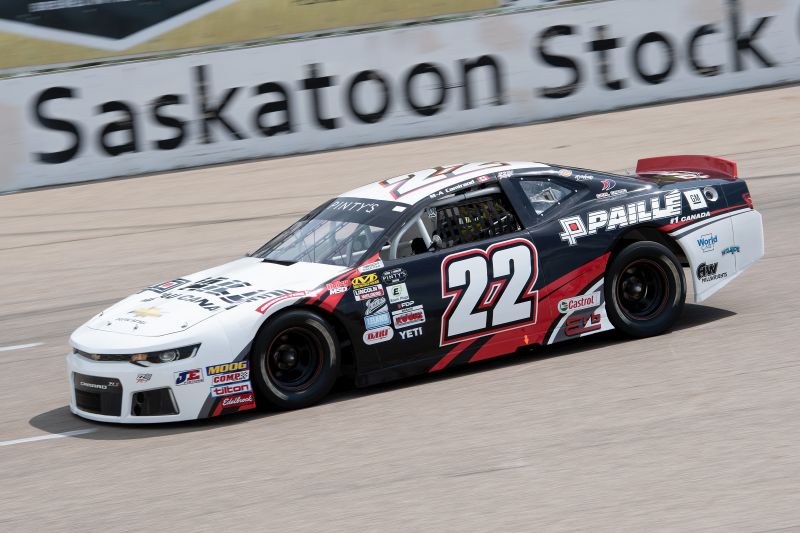 The driver of the GM Paillé n°22 Chevrolet Camaro scored two top-10 finishes, but he felt that he couldn’t pull enough speed out of the car.

Although he was able to score fast lap times during practice and qualifying, placing respectively sixth and fifth, Camirand had a hard time handling the car during the first 125-lap race.

“Races on oval tracks have been difficult since the beginning of the season. In practice, we have been able to score quick times, but after a few laps, I felt that we were losing some speed. During the race, I fought to stay in the top-10. My GM Paillé n°22 Chevrolet Camaro was oversteering,” said Camirand.

A red flag was dropped after a severe thunderstorm hit the track after 116 laps and cut the race short.

After the sky cleared out and a short break, the second twin race started late in the evening, while the short oval track was still wet.

“Some changes had been made during the winter, and since the beginning of the year, we have been struggling with our oval cars. I think the new suspension setup didn’t work out with new General tires. We came back to last year’s settings, and it was better in the second race,” said the driver from Saint-Léonard-d’Aston.

Camirand was able to move front to the fifth spot, but he lost a few positions when he was caught behind an incident in front of him.

“Maybe we could have scored a fifth or sixth place finish, but our car wasn’t fast enough to run with the leaders. The changes we made improved the handling of the car, and we think we are moving towards the right direction. We are working with Scott (Steckly), 22 Racing team owner, to improve our oval cars,” said Camirand.

Marc-Antoine Camirand and the GM Paillé n°22 are now heading to Edmonton International Raceway, as the NASCAR Pinty’s series’ trip West ends in Wetaskiwin, AB, on Saturday, for the Luxxur 300.