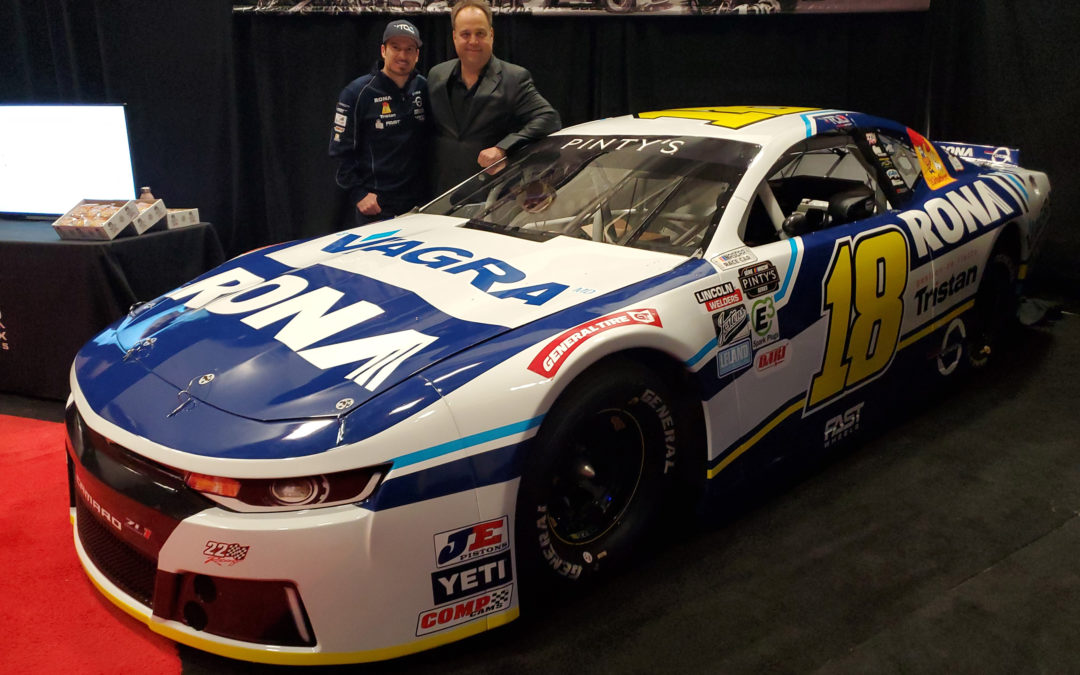 “On the eve of the upcoming 2020 Pinty’s racing season, we have a lot of announcements to make, one that includes a new sponsor who brings new colours to our Team 22 Racing car. I am proud to introduce the iconic VIAGRA brand as a co-primary sponsor,” said Alex Tagliani.

“VIAGRA’s participation in our sport is an extension of the brand’s ongoing focus of reflecting the spirit of vitality that’s associated with men being proactive and open about their health and wellbeing. As the driver of the number 18 racecar, I am very happy to have VIAGRA joining us as one of our main sponsors and pleased to present this racecar to NASCAR fans. I hope we reach new heights in 2020 with lots of podiums and wins.”

“I am really honoured that VIAGRA, which just celebrated its 20th anniversary in Canada, is joining our team as one of our major sponsors on the #18 car for the 2020. The 22 Racing Team Chevrolet Camaro will still sport the RONA and St Hubert colours and as we speak, we are working with them on a new, soon to be launched, program. I would like at this point to also mention that CanTorque and La Petite Bretonne, two of my long-time supporters, along with 440 Laval Chevrolet, have extended their relationship with me and the team. I would also like to welcome two newcomers: Tristan Fleet Management, and Andy Transport. I am grateful to all for their commitment,¨ concluded Tagliani.

Several people helped Alex and his team unveil his 2020 livery at the Salon International de l’Auto de Québec. Besides key roles played by members of the Salon, Alex and his team were pleased to be able to count on Dominic Fugère of the Grand Prix de Trois-Rivières, who acted as Master of Ceremonies.

Over the winter months, Tagliani’s team has been hard at work getting the number 18 Chevrolet Camaro VIAGRA/RONA/St Hubert ready for a very competitive 2020 NASCAR Pinty’s season. Alex was also busy working on several projects with the Grand Prix de Trois-Rivières, including contests that will enable several race fans to attend the GP3R event next August with Team 22 Racing.

Officials of the NASCAR Pinty’s Series were also busy at work organizing a new, varied race schedule with several changes being made in for 2020. No longer on the schedule are Riverside Speedway in Nova Scotia, Autodrome St-Eustache, north of Montreal, and the short-lived annual trek south of the border to New Hampshire Speedway. These three races will be replaced by a couple of familiar tracks: Sunset Speedway and Circuit ICAR, and the first dirt track race at Ohsweken Speedway in Ontario.

Sunset Speedway, located in Innisfil, Ontario, returns to the schedule after a four-year absence as round four of the 2020 season, and will be held on July 4, between the event at Autodrome Chaudière, Quebec, and the race on the streets of Toronto. Alex Tagliani won the last two races on Sunset’s 0.53 – km oval in 2015 and 2016. In 2015, he wrote his name in the NASCAR Canada history book when he lapped the entire field on his way to Victory Circle. Tag led the last 192 laps of the 300-lap affair. The following year on the same oval track, he won again, this time leading 163 of the 300-lap race.

Circuit ICAR, the other track to return to the 2020 schedule after a three-year absence, will be held September 12. Round 12 of the race season will be held between two Ontario races: the Canadian Motorsport Park race in Bowmanville and the season finale at Jukasa Motor Speedway. Tag will be looking for his first win on this road course. In 2015, he finished third and in 2014 and 2017 he placed fifth. His overall record shows five top-8 results at ICAR.

The August 18 race at the 0.6-km dirt track at the Ohsweken Speedway in Ontario will the first dirt race to be held in the NASCAR Pinty’s Series history. Round 10 of the schedule will be held between two road course events: the Grand Prix of Trois-Rivières, which extends its length from 50 to 60 laps, and will be held on August 9, and the September 6 race at Canadian Tire Motorsport Park (CTMP).

With two races in Bowmanville including the season opener; two at Jukasa Motor Speedway including the season finale, and the three-race annual Western swing to Saskatoon and Edmonton for a total of 13 races, there will be a lot of racing to keep Canadian teams and race fans occupied during summer 2020.