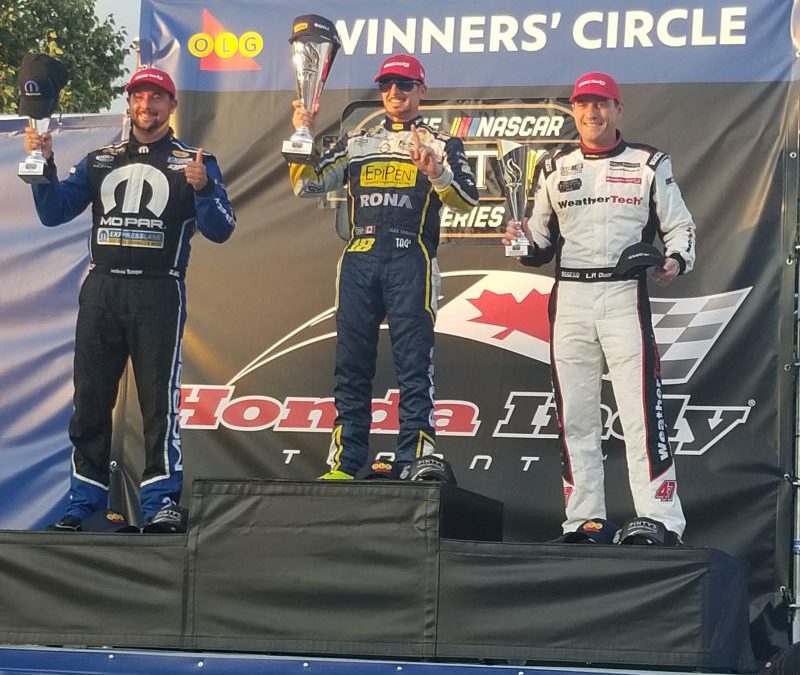 Montreal, July 13, 2019 – Alex Tagliani drove a masterful race to win Round 4 of the 2019 NASCAR Pinty’s Series held Saturday afternoon at Exhibition Place in downtown Toronto. The late afternoon race, which was rain-delayed for an hour and a half, was a banger most of the way until lap 37 of the NASCAR overtime finish. Starting from the pole, Tagliani led all but three laps of the Pinty’s Grand Prix of Toronto to score his second NASCAR win in Toronto, his ninth series victory.

Tagliani had some unfinished business in Toronto when lost the win to Andrew Ranger on the last lap in last year’s NASCAR overtime race in the Queen City, but he was not to be denied this year. Andrew Ranger, who led three laps, finished second ahead of LP Dumoulin.

Over the course of its six-year history, the Pinty’s Grand Prix of Toronto has only seen three drivers on the top step of the podium and history repeated itself again today with the win by Tag. All three are still leading the 2019 points standings but with a new leader in Andrew Ranger, winner in 2010, 2011 and 2018, two points ahead of. Kevin Lacroix, the Toronto winner in 2017. Third in the standings with only now 14 points back, is Alex Tagliani who won in 2016 and 2019.

“I am super happy to have brought this win to Team 22 Racing,” said Tagliani. “The team gave me a really good car this weekend and we scored maximum points. I am really proud of the guys especially after a season debut that did not go as well as I had expected on oval tracks. They rolled up their sleeves and gave me a great car that enabled me to offer this performance. It shows they have pride. I was happy to see them all smiles and jumping for joy when I entered the pits after the race.

“There were some good fights during the race. Restarts were tough because of the nature of the track that makes the corners feel like you are entering a funnel. This is very inviting for those who want to pass you. The leader sets the tone with his breaking, but if you don’t block enough, you invite the driver in third place to jump ahead of you, like Andrew (Ranger) did on lap 15. If you block too much the car behind you in third place, you open the door to the driver on the outside.

“I am not complaining about being first on restarts, but it’s very stressing. The battles I had with Andrew, who was driving very aggressively but cleanly, are what makes car racing exciting. Today’s feuds were similar to those we had last year, a battle that I lost, but not this year. This victory reduces the gap to the leader in the point standings. Overall, a very satisfying weekend.

“We also had a very busy weekend in the RONA tent with huge crowd coming in everyday to says hello and cheer us on as they tried all kinds of stuff,” concluded the Toronto winner.

The NASCAR Pinty’s Series now take its annual Western trip to Saskatchewan and Alberta for a three-race showdown. The first two short track contests will be held in Saskatoon at Wyant Group Raceway on Wednesday, July 24th with a pair of 125-lap feature races and the third event, a 300-lap affair, will be held on Saturday night, July 27 at the Edmonton International Raceway.